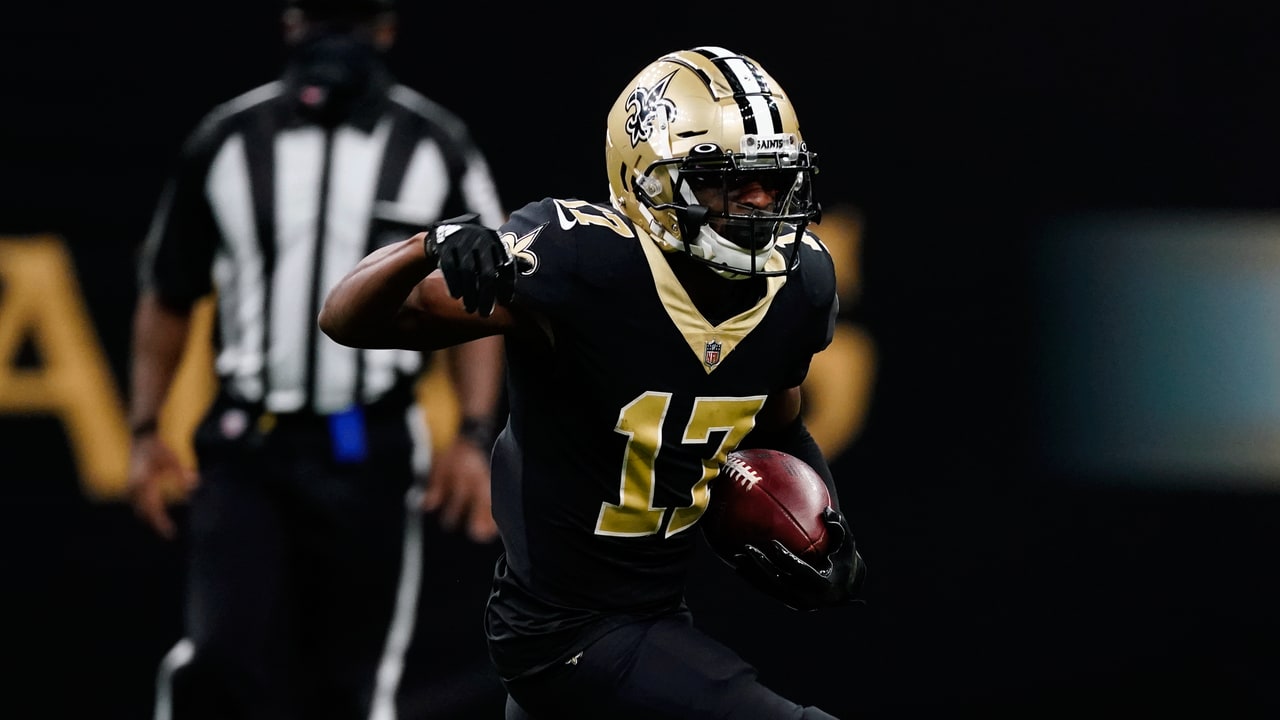 Now that you’ve got a week under your belt with this team, do you think like, how do you feel kind of your comfort level in the offense with Drew (Brees), all that, now that you’ve got an actual game under your belt?
“I think my comfort level is probably about an 85. Obviously, I want it to be more but, not being able to go through OTAs and stuff like that. Obviously, I would be lying to you guys if I say, yeah, I am 100% comfortable. But I know, week by week, I am going to get more and more comfortable with the personnel, with the plays and everything. And so I am looking forward to this upcoming game to see if I can get that 85 to 90 and week by week, just like I said, just keep progressing. Because it is not an easy offense. It is an offense, that it’s a reason why they’re an explosive passing offense. Because you move around a lot, different splits, different personnels (groupings), it’s a lot of moving pieces. And so, it can definitely make your head spin. But, you know, I’m starting to grasp it more and more.”

Off the field, you’re one of the more veteran guys in that room, and how, I guess, have you worked in kind of teaching some of the younger guys, because there are a lot of younger guys in there too, even though you don’t know the offense as well as you want to right now?
“Yeah, I think it’s just about speaking of it, by seeing anything, right. If I see something, it’s a reason why I, you know, I’m subject to say something. It’s because, you know, being in the league, you know, 11 years and being fortunate enough to go to the Super Bowl you know, three times in those 11 years, being on good teams. And you know what it takes to make it all the way to the top and win it all. And so, if I’m seeing something it’s a reason why. You know, like I said, I’m subject to say something, it’s because it’s probably not the right thing to do. But I’ll tell you what, we got a great nucleus of guys here. Tre’Quan (Smith), Deonte (Harris), Bennie Fowler, those guys, man, they come to work every single day. So for me, you know, I broke out the huddle the other day, and I was just telling them, one thing we always got to remember is that, you know, these opportunities don’t come and I’m talking about just being in the National Football League in general. It’s a blessing to be in the NFL. And I know, sometimes we get so caught up in the hype of it, or the games and trying to be perfect and make the plays. But, sometimes you gotta take a step back and realize how blessed we are, you know, to be able to do what we do. This is the American dream for a lot of people, where everybody wants to be a professional NFL player. And so I was just telling them, just, don’t think about the X’s and O’s so much. Always remember to have fun and remember how blessed you are. And I feel like, you know, in me telling them that, I was also telling myself that. Because sometimes we can’t get caught up. And that always helped me to relax and understand, you know, how blessed I am.”

Obviously, you have a history of playing with some great quarterbacks over the years in Peyton Manning, Ben Roethlisberger and now Drew Brees. I’m curious, you mentioned, you know, just, you know, maybe 85% of the comfort level there. If it typically takes game reps, you know, in the regular season to kind of finalize that, one hundred percent comfortability or is it just the nature of this offseason? And not having those OTAs and regular training?
“Yeah, I think it’s a mixture of both. I think the first game kind of caught me off guard with the amount of personnel that we use. We have over 15 personnel packages, you know. And you know, some plays I’m in, some plays I’m out. So, some plays they’re calling the personnel and I have to remember, like, am I in on that personnel? Or am I not in on that personnel? And sometimes I get caught up like, like having to think. So it’s definitely different, it’s different than any, you know, team I’ve been on. I’ve never had that many personnels (groupings). Most of the time, you’ve got three wide receivers, that’s a three receiver personnel. You’ve got two wide receivers, that’s a two wide receiver. If you’ve got one, that’s one and that’s it. Most teams have probably about six personnels (groupings), here you’ve got a lot. And you know, it’s a, it’s going to be an adjustment but like I said, it’s a reason why they do it. Because they try to get guys in the right position to make the best plays possible. And so, they’ve been having a lot of success with it. And I’m open to it. Like I said, it’s just a learning process for me.”

With the way they bring guys from all kinds of different spots on the field and routes from different places and interchange spots, do you almost have to know the offense like a quarterback, just to know the ins and outs of everything?
“Not so much. That’s Drew’s (Brees) job. My job is to know the personnel. And then from there, I know what position I’m playing. And then from there, I know the route. And so, me like, I don’t have to know what everybody ‘s doing. So, how I study is, I just study the personnel and then where am I at, in that personnel? And, what do I need to do? And that’s that. But like I said, we’ve got so many different personnels (groupings) in the first game. We’re subbing in and out and we don’t have, we do not have the same luxury that we have at practice to be like, oh you are in or you’re not. It has to be a smooth transition. So, I’m getting adjusted to that. And I think you can only prepare for that during the game.”