Gradually, and then all at once, America’s generations-long war on drugs is unraveling — so quickly that it is easy to be deceived.

Monday was the first day of across-the-board drug decriminalization in Oregon, where small-time possession of all drugs — heroin, crack, magic mushrooms, LSD, bath salts, etc. — is now punishable by nothing more than a $100 fine.

Later that day, Sen. Charles Schumer (D-NY), the new majority leader, vowed that the 117th Congress would be the one to legalize marijuana.

“There’s no stopping the industry now,” an ebullient cannabis-sector lobbyist, lost in the moment like a GameStop trader circa the middle of last week, told Politico.

This would be true, if not for three very unfortunate realities: Joe Biden, Republicans, and Democrats. Legalization would be a slam dunk, if not for politics.

And “decriminalization,” depending on the exact form it takes, could be either a worthless gesture or an extinction event for the weed industry — which, in any event, should not expect any heroic lifts in Washington. Not as long as the COVID-19 pandemic lasts — and maybe not as long as Joe Biden is president.

Democrats control the White House and, for now, both houses of Congress. This should be good for weed since, after all, the Democrats’ official platform calls for decriminalization. And it was Republican obstructionism that kept cannabis policy reform — including the Senate version of the MORE Act, the federal decriminalization bill that passed the House in December — reliably bottled up in Washington.

This analysis neatly forgets the president’s inconvenient history as one of the chief architects of the war on drugs that filled America’s prisons. And this also assumes that Biden, or other top Democrats, will spend limited political capital on cannabis, when getting even coronavirus relief through Congress, let alone censuring a member who liked social media posts advocating murdering her opponents, aren’t sure things.

“We’re not going to see Biden or the White House pushing for the MORE Act, or de-scheduling marijuana,” John Hudak, a scholar at the Brookings Institution think tank, told the Verge.

Even thinking about what Biden would do hinges on whether he is presented with a bill he likes. And getting that far will require Republicans — not just a couple, but 10 — in the Senate.

Recall that accomplishing most anything in the United States Senate requires 60 votes, not a simple majority. Biden is struggling to find 10 Republican senators willing to meet him halfway on coronavirus relief. Who are the 10 Republicans willing to hop on the Democratic bandwagon for an issue that’s still a front in the culture war? Tellingly, the cannabis lobbyists and executives gushing to Politico did not have this answer handy.

And what about the Democrats? The MORE Act passed, but only after top leadership canceled a September vote because they were worried cannabis reform would be a bad look ahead of the November election — an election in which weed won a clean sweep, with voters approving legalization by wide margins in Arizona, New Jersey, Montana, and South Dakota.

Voters like legalization, but Congress should not realistically be expected to spend too much time debating the needs of the cannabis industry, even after a record year of cannabis sales, when it can’t deliver $1,400 checks to impoverished Americans. “Look at the Democrats helping pot dealers while you suffer in silence,” is a line that the Democratic leadership will fall all over itself to avoid hearing during the 2022 midterms. And it shows. 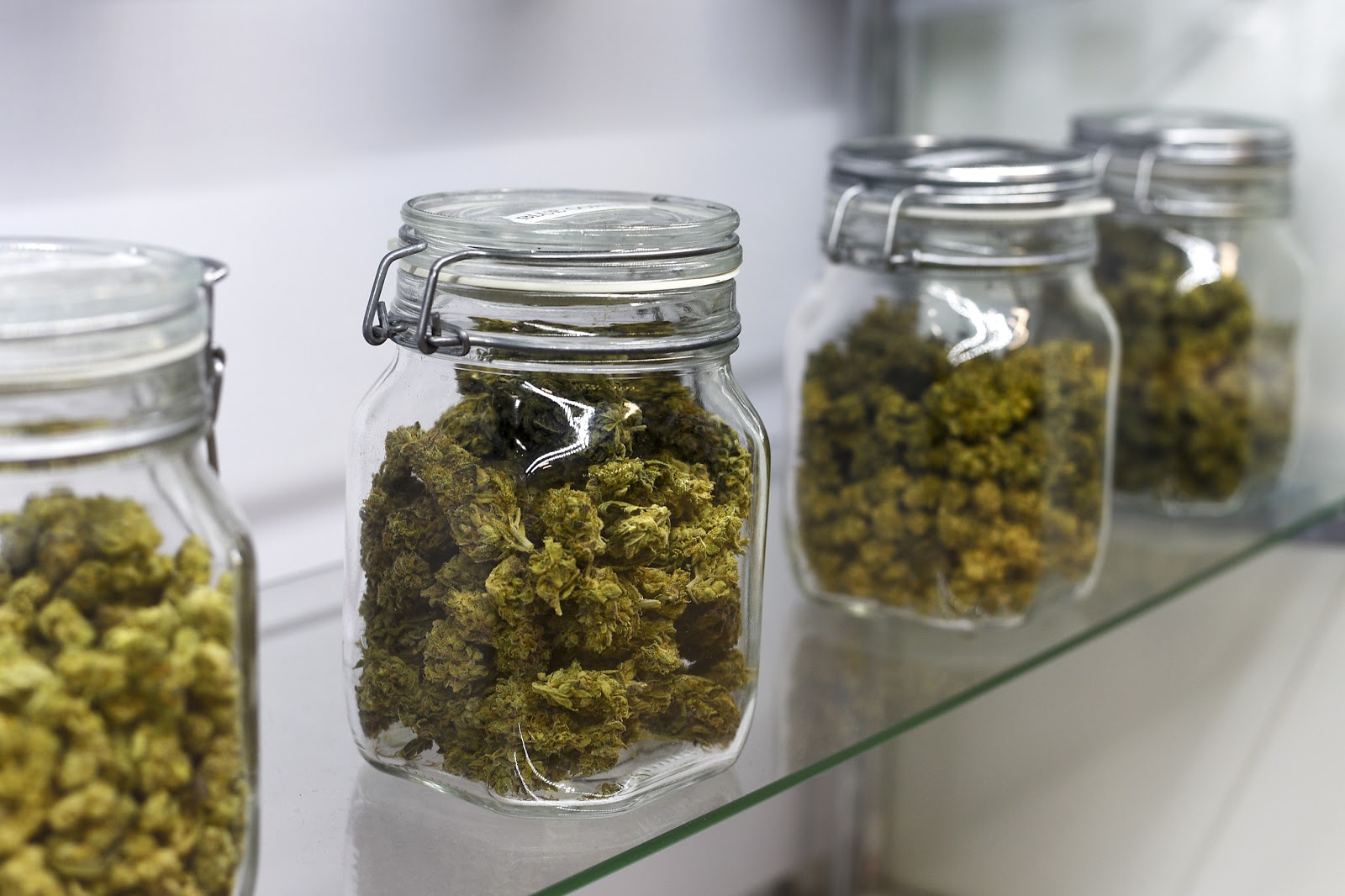 Marijuana on display at Raspberry Roots in Anchorage, AK, in October 2019. ​Photo credit: The Alaska Landmine / Flickr (CC BY 2.0)

There’s a chance that cannabis reform of some kind might end up tucked into a COVID-relief bill, or a spending bill, or some other unrelated legislation. Such rumors have been floating around Capitol Hill since last summer. There’s also a chance that Democratic leadership might pivot to decriminalization as a practical alternative to legalization, selling it as an obvious move that even Republican voters want.

And that, depending on the final form, could either be a disappointment or a disaster.

Received wisdom states that since red states have voted to legalize either adult-use or medical cannabis, cannabis is therefore now bipartisan. “Even Mississippi legalized medical marijuana” would seem like a rallying cry for unity. But this way of thinking ignores that legalization was accomplished not by lawmakers, but by voters — who are nevertheless still electing officials willing to stake their reputation on being anti-weed.

Arkansas voters approved medical marijuana in 2016. Just two years later, they overwhelmingly reelected governor Asa Hutchinson, George W. Bush’s Drug Enforcement Administration chief, who opposed the measure and hates the legalization. And in December, Arkansas’s Congressional delegation voted in unison against the MORE Act — which, in addition to taxing cannabis at the federal level and removing it from Schedule I of the Controlled Substances Act, would also set aside taxes on weed for disadvantaged communities hurt by the drug war, and prohibit deporting someone or denying them federal benefits for a drug crime. Pro-immigrant, pro-entitlements? Post-Reagan, post-Trump, that’s just anti-Republican.

There are more moderate Republicans in states with either adult-use or medical programs on the books: Alaska’s Sen. Lisa Murkowski, Maine’s Sen. Susan Collins, and Utah’s Sen. Mitt Romney. That’s three possibles, but seven more committed votes will be required to advance a bill through the Senate. Considering that neither Schumer’s nor Vice President Kamala Harris’s Senate versions of the MORE Act could win even a token Republican co-sponsor, finding 10 Republican votes to get the thing through will be an enormous lift.

And by the way: What is decriminalization, anyway? Depending on what form is approved, it could be absolutely nothing.

Decriminalization: Could Be Bad

The president has said he favors federal decriminalization — just eliminating police, courts, and prisons from the equation — while leaving legalization up to the states. What that will look like is still in question.

One version of “decriminalization” is modifying the Controlled Substances Act, the main foundation of the federal drug war. Currently, cannabis is in Schedule I, meaning it’s outlawed in all forms. Shuffling marijuana into Schedule II or Schedule III of the Controlled Substances Act — the classification for many far more dangerous drugs that can be prescribed by a doctor, like opiates — would eliminate most, but not all, involvement from federal drug cops, and would make cannabis easier to research and to study. More science, as a prelude to legalization, is something Biden has called for.

Even the cannabis industry isn’t in love with the idea of decriminalization. Why? Schedule II drugs have gone through the onerous and expensive Food and Drug Administration approval process and are dispensed from federally licensed pharmacies. This is very different from the state-licensed cannabis dispensary model. So, perhaps counterintuitively, decriminalization through Schedule II would invite opposition from the weed industry itself, since it would wreck the current business models of all existing medical and recreational cannabis businesses.

The cannabis industry’s perspective is that it doesn’t need decriminalization; what it needs is banking and tax reform, something half of House Republicans also oppose.

Which is why, in the cynic’s view, decriminalization would be just the kind of empty gesture or symbolic half-step that mainstream Democrats would love. Joe Biden and the Democrats are not really ready to go to war for weed.

Keep it civilized, keep it relevant, keep it clear, keep it short. Please do not post links or promotional material. We reserve the right to edit and to delete comments where necessary.