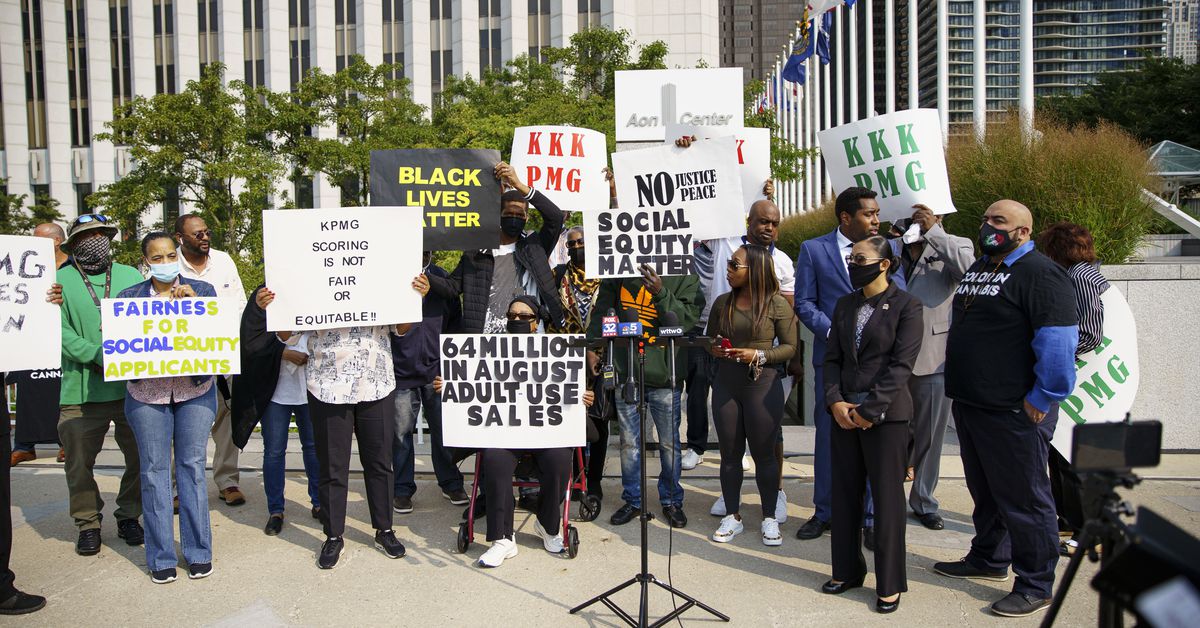 Gov. J.B. Pritzker’s office announced Monday that losing pot shop applicants will now be given the opportunity to revise their applications and challenge their scores before the state holds a lottery to determine the winners of the highly sought after licenses.

While the 21 firms that were initially selected for the lottery all received perfect scores, over 900 applicants who didn’t make the grade will now be provided their scoring along with a notice outlining any deficiencies, according to a statement from the governor’s office.

The losing firms will then be able to amend their applications or petition the Illinois Department of Financial and Professional Regulation to reevaluate their original submissions if they suspect there were errors or inconsistencies.

“As we worked with the General Assembly, equity and fairness have always been at the heart of our approach to legalizing cannabis, and when we heard significant concerns from numerous stakeholders about the process to award dispensary licenses, I said we needed to take a pause to fix their concerns, within the bounds of our landmark law,” Pritzker said in a statement.

“While this process remains a marathon and not a sprint, we believe that these new steps will inject more equity and fairness in the first round of license awards and provide insight as we improve the process for future rounds.”

The review will be conducted by IDFPR officials and not KPMG, the global accounting firm that was awarded nearly $7 million in no-bid contracts to grade all the upcoming pot licenses, including those for cannabis craft cultivation, infusion and transportation.

The news comes after weeks of outcry from so-called social equity applicants whose dreams of becoming pot shop operators went up in smoke when the state announced the finalists for the 75 dispensary licenses on Sept. 3.

Though all the lottery contestants earned additional points by qualifying for social equity status, a designation intended to bolster diversity in the overwhelmingly white weed industry, reports have continued to emerge showing that many of those applicant groups include clouted and deep-pocketed individuals.

Meanwhile, scorned applicants have filed a growing number of lawsuits seeking to halt the lottery.

The actions outlined Monday by Pritzker mirror a proposal Sept. 13 by state Reps. La Shawn Ford, D-Chicago, and Kathleen Willis, D-Northlake, who said the attorneys representing dozens of losing firms would drop a federal lawsuit to hold up the lottery drawings.

“Gov. Pritzker made the right decision to stand on the side of fairness,” Ford said Monday. “All of the applicants deserve a fair chance at the process — it’s the equitable way. However, the applicants shouldn’t have been subjected to additional legal costs because of the negligence of the state.”

Attorney Jon Loevy said he now plans to drop the federal suit as he credited Pritzker and Ford. Loevy added that Justice Grown, the multi-state pot company tied to his law firm, would work with Ford to provide free assistance to social equity applicants looking to correct deficiencies.

Multiple suits have also been filed in state court, but it’s unclear whether Pritzker’s plan will also appease those plaintiffs.

State Rep. Kelly Cassidy, a Chicago Democrat who led the legalization push, raised concerns last week that a compromise could give way to another round of lawsuits from the initial finalists.

“There’s always another side,” Cassidy told the Sun-Times. “And that side can then take action.”

Jermell Chavis, a former Marine from North Lawndale, fell just three points short of a perfect score on his only application to open a dispensary in the Chicago area, one of the 17 regions outlined by the state. Though Chavis now has an opportunity to revise the floor plan in his application, what’s unfolded so far has made him skeptical of the state officials overseeing the licensing.

“It’s kind of bittersweet because now you have to go into a lottery,” he said. “And who’s to say the lottery is going to be anything like fair?”

Chavis was granted extra points on his application for his service, like all the groups that have veterans as majority owners. Still, he believes some of the licenses should have been allocated specifically for those who served in the military — though he questioned whether some of the veterans included on applications were merely “names on paper.”

Chavis said he uses cannabis to treat his diagnosis of post-traumatic stress disorder, a byproduct of his two tours in Iraq. Now, he hopes to open his proposed Chi Arome dispensary somewhere on the South Side or West Side, where it can serve as “a foundation for economic development” and help attract other businesses.

“Through the revenue, we can then turn around and we can revitalize,” he said.