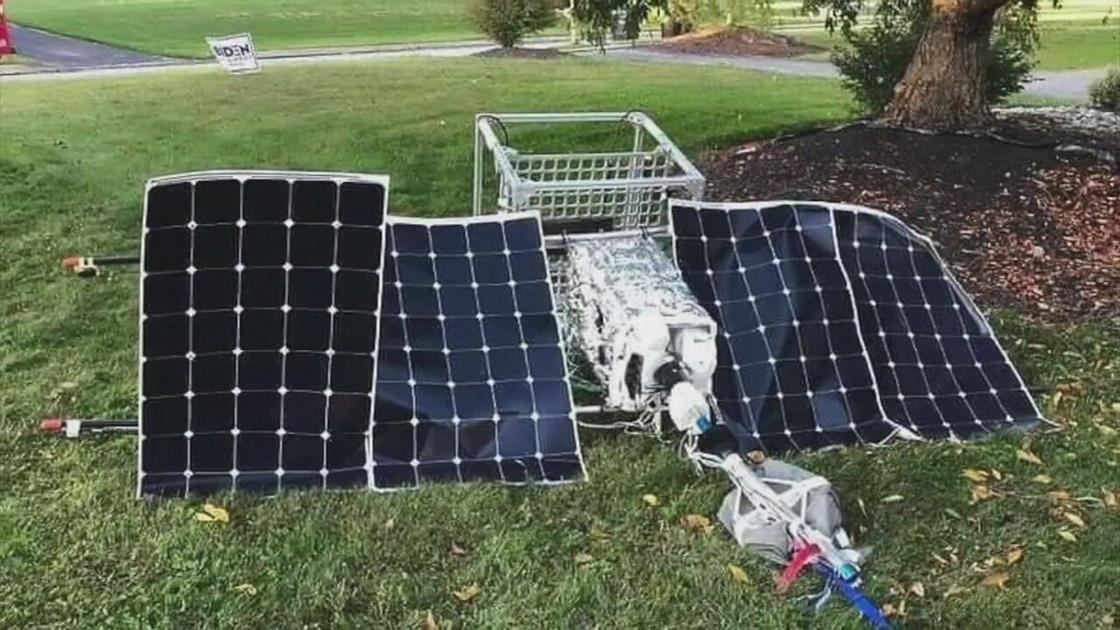 It’s certainly no bird nor plane but you might have seen it flying over Southern Lehigh County Friday afternoon.

“It was an interesting Friday night,” said Jeff McElhaney.

Imagine you’re in your backyard, much like McElhaney was, when you see something falling out of the sky, plummeting right toward you.

“As it came closer, it was clear that it was an object and I thought ‘okay, maybe it’s a satellite’,” said McElhaney.

Indeed, it did look like one but it’s technically an antenna. It’s ten feet long, five feet wide and found it’s ultimate resting place in a tree in TJ Seidenberger’s front yard in Lower Milford Township. He and his family weren’t home at the time of the crash but you can imagine his surprise.

“It was definitely wild getting that phone call and then rushing home to see what all the commotion was about,” said Seidenberger.

State Police and Lower Milford Fire Department acted quickly in carefully removing the antenna from the tree but how did it get here? According to data from FlightRader24.com, we could see that a high altitude balloon had taken flight and landed in an area similar to where the crash happened. The data we found, and the aircraft registration, links the balloon to Project Loon which is operated by a subsidiary of Google’s parent company, Alphabet Incorporated, and aims to provide better internet access to rural and remote areas.

This balloon crossed over into the commonwealth near Hagerstown, Maryland. According to this data, it appears to have detached from the antenna over Berks County. That’s when the parachute was deployed, causing the payload to fall from 54,000 feet at almost 100 miles an hour, before finding a cozy place to land here in Lehigh County.

No one was hurt in the landing. WFMZ’s Holly Harrar reached out to Google for comment but did not hear back. The FAA has been notified of the incident but officials say did not decide on whether they will investigate the crash. Nevertheless, this neighborhood in Lower Milford Township has something to talk about.