The past week saw positive macroeconomic data in China countering the drag from lingering U.S.-China political tensions and saber-rattling. The better-than-expected August new bank loan data which was released after the market closed the previous week provided a bullish stance on Monday. Investors also welcomed the quickening in the broad credit growth as that was indicative of an increase in economic activity.

The series of affirmative data helped the offshore renminbi to break the psychologically important 6.80 level early in the week. As it stands currently, the Chinese currency is stronger than it started the year, as though COVID-19 has not struck China and the deteriorating U.S.-China relationship has no impact at all. The strengthening in the renminbi is not yet done. Analysts are forecasting further appreciation right into 2021.

It’s important to note that China has achieved this amazing feat without the need to “pump” in liquidity into the financial markets as rapidly and massively as the U.S. did. China’s M1 money supply, comprising monies that are highly liquid such as cash, checkable (demand) deposits, and traveler’s checks, has grown just 2.64 percent since the start of the year. In contrast, the M1 money supply in the U.S. jumped more than 30 percent in the same period.

It’s the same story for M2 money supply which includes M1 as well as funds that are less liquid in nature such as savings and time deposits, certificates of deposits, and money market funds. China’s M2 rose by 7.00 percent while it grew by a fifth in the U.S.

Another major driver for the strong renminbi has been the huge jump in China’s trade surplus to around historical levels, despite the rambunctious talks of trade wars. Surprise, Surprise! China’s exports are surging while its imports have reduced. Bloomberg ran an article late in the week declaring: China is Winning the Trade War.

Factories around the world are operating at subpar levels with countries managing the reopening carefully amidst flare up of outbreaks. On the other hand, Chinese manufacturers have returned to normal operations since lockdowns eased in March, enabling them to supply the world with essential products and more. In so doing, China’s export market share soared to nearly one-fifth of the total global exports. 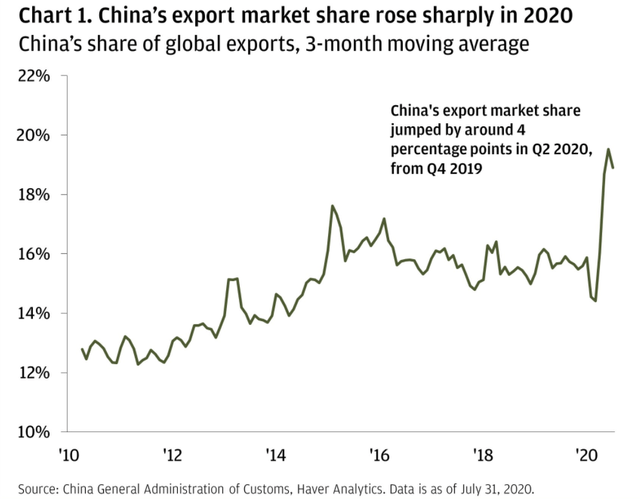 At the same time, Chinese consumers have been cautious about spending with the lackluster economic outlook and the specter of a spike in unemployment. This has curbed consumption in general. More importantly, local brands have turned to domestic consumers to cope with the weak export orders.

Marketing to a local audience has ramped up, supported by a “buy local” movement. The Chinese government has also encouraged the industries to become more self-reliant, i.e. develop local substitutes instead of depending on foreign components. This switch from imported goods to local products is considered minor but it has certainly impacted the overall import numbers.

On the monetary policy front, we understand that the interest rate differential between the two countries have a positive correlation with the currency pair. 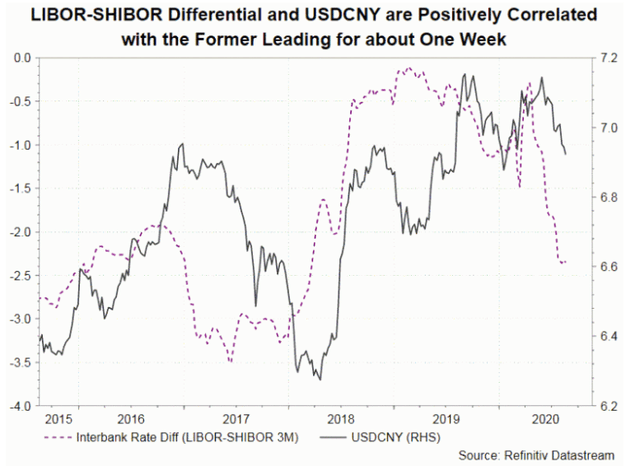 The Federal Reserve has signaled the pausing of interest rate hike for potentially “four to five years”. On the other hand, China has seen its rates rising after a bottom in April. Thus, it is possible that the renminbi continues to strengthen over the U.S. dollar. 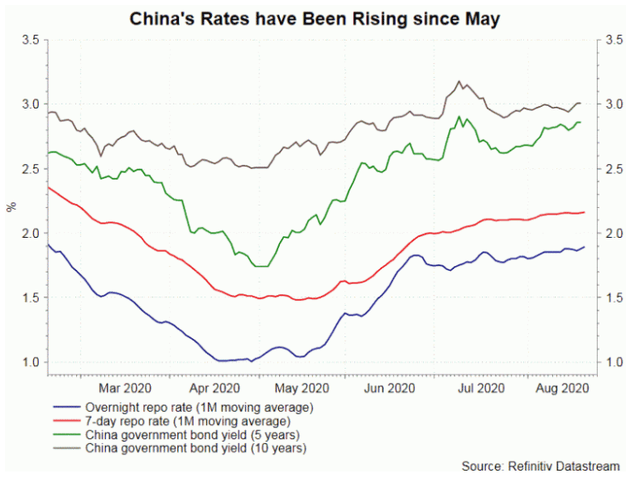 The weakness in technology shares dragged U.S. stocks to a six-week low on Friday, with the S&P 500 declining for three consecutive days. On the other hand, besides the positive drivers mentioned earlier, sentiment for Chinese equities was also boosted by the World Trade Organization ruling that President Donald Trump’s administration violated international rules when it imposed tariffs on billions of dollars worth of Chinese goods.

Market players could also have been impressed with the recovery status of consumer spending in China as gleaned from the comparable sales data released by Starbucks on Tuesday. Its August comp sales in China was a mere negative 4 percent excluding the effect of a temporary value-added-tax (‘VAT’) exemption granted by the Chinese government. 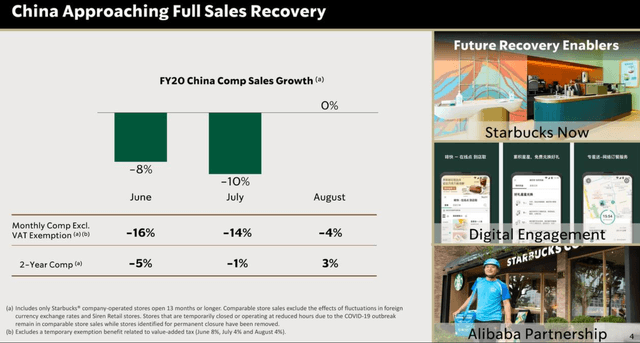 During a conference, the management reiterated that the beverage giant was “still on track to achieve positive comps, excluding the VAT benefit, by the end of our fiscal Q1 in 2021.” The optimism was supported by, among other factors, “ongoing leverage of our digital partnership with Alibaba (BABA), which includes delivery.”

The Chinese Internet sector representative ETF, the KraneShares CSI China Internet ETF (KWEB), performed in line with the broader Chinese ETFs, closing up 2.53 percent for the week. Among the key holdings of the KWEB ETF, the share price of GSX Techedu (GSX) headed the leader board of gains with a 26.31 percent appreciation. The stock closed higher every day of the week.

The recent share price climb still leaves the stock around 20 percent lower than its all-time closing high established last month. It is nonetheless remarkable considering that GSX Techedu has been the subject of several fraud allegations. When famed short-selling outfit Muddy Waters splashed into the scene, the stock was trading for just one-third of its current value.

In August, Citron Research reiterated its suspicions toward the after-school tutoring service provider, contributing to a steep sell-off. The revelation of an investigation by the U.S. Securities and Exchange Commission (‘SEC’) triggered another wave of selling even as GSX Techedu reported an incredible set of quarterly results earlier this month:

Recall that TAL Education had to confess to a fraudulent act back in April and contend with local reports on Chinese parents being dissatisfied with the quality of the online classes as compared to physical ones when much of China was under lockdown earlier in the year.

KE Holdings (BEKE), also a new entrant to the top 10 holdings of KWEB, was the next strongest performer with its share price shooting up 20.28 percent. The operator of an “integrated online and offline platform for housing transactions and services” in China made its debut on the New York Stock Exchange on August 13, 2020.

Although the stock publicly traded for only over a month, Krane Funds Advisors, the investment manager, deemed it fit to acquire enough of KE Holdings such that it is now (as of September 18, 2020) the sixth-largest holding of the KWEB ETF representing 4.54 percent of the net assets. At the same time, the ETF has reduced its concentration of e-commerce names, with companies like Bilibili (BILI) and Vipshop (VIPS) getting relegated off the top 10 holdings. 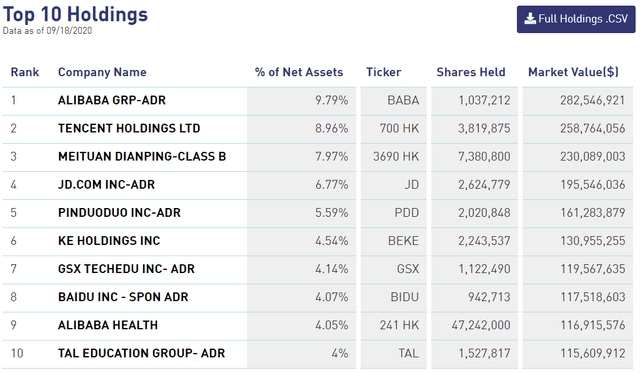 With many market players clamoring for shares of the online property brokerage, the market capitalization of KE Holdings quickly surpassed that of internet stalwart and search engine leader Baidu (BIDU). The former is now valued at more than 50 percent higher than the latter, although Baidu has seen better times prior to its share price slump from the second half of 2018.

It might not be obvious from the stock performance but Baidu is doing fairly well in a COVID-19 year where the advertising climate is poor. The consensus estimate is for a 1.9 percent YoY growth in revenue and 5.5 percent in earnings per share (‘EPS’). Of course, you would have guessed correctly that KE Holdings is projected to do better. It is expected to grow its revenue by 44 percent this year, around 23 times faster than Baidu.

Analysts are forecasting KE Holdings to outperform even its U.S. peer, Zillow Group (Z), albeit only for the current fiscal year. Their price-to-sales ratios on a forward basis are comparable but the profitability of KE Holdings is substantially better than Zillow. According to the consensus estimates, the latter is expected to report a positive EPS for the first time only in 2022.

The third best performer for the week was iQIYI (IQ) which gained 8.82 percent. In a recent article, I mentioned the video-streaming platform operator was trading in a pattern reminiscent of the March-June period prior to its mid-June breakout. In iQIYI: A Strong Buy On Multiple Positive Catalysts, I shared in detail what would drive the share price of the leading Chinese video-streaming platform higher.

“From the technical chart of iQIYI, the stock could be on the verge of a breakout from a two-and-a-half-month old down-sloping trading channel. The share price appreciation in the past six trading sessions was accompanied by a rising volume trend, similar to what happened near mid-June before the stock gapped up strongly.”

The stock has broken out and has been trading above the aforementioned price channel, defying the shift in investor attention away from stay-at-home names in the past weeks. As suggested in the same article, there was indeed some back-testing. That phase is over, providing a firm base technically for the current uptrend.

“If the anticipated breakout does happen, we should expect some “back-testing” of the resistance-turned-support (the top of the green parallel lines in the chart above) in the subsequent few trading sessions before a more convincing exponential climb upwards. Recall that JD.com (JD) experienced several “back-testing” in May before it skyrocketed to where it is today.” 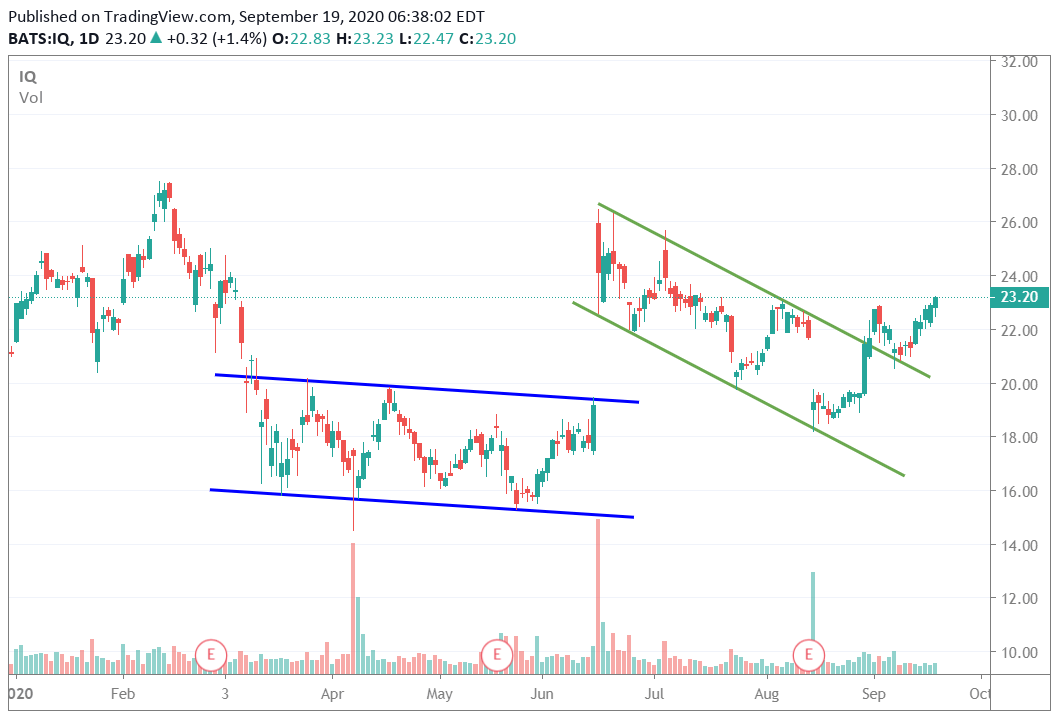 Heading the other way was Pinduoduo (PDD) which succumbed to selling pressure from Tuesday, dropping 5.82 percent for the week. Shareholders were apparently panicky after a Financial Times report revealing the antics of money-launderers which used Chinese online shopping platforms to funnel cash offshore.

The “exposé” was actually already brought to light by state media last month. Due to China’s strict capital controls, the Chinese have resorted to myriad ways to shift funds overseas. The motivation to do so was heightened with many physical gambling venues inaccessible due to travel restrictions. Macau, the Chinese gambling haven, remains out-of-bounds for most Mainland Chinese. Thus, gamblers turned to offshore gaming websites in droves.

According to the authorities, “users” would place fake orders on shopping sites and the amount paid would then be credited to their gaming account. Pinduoduo was unfortunately singled out due to its popularity as the designated platform to use by the perpetrators. 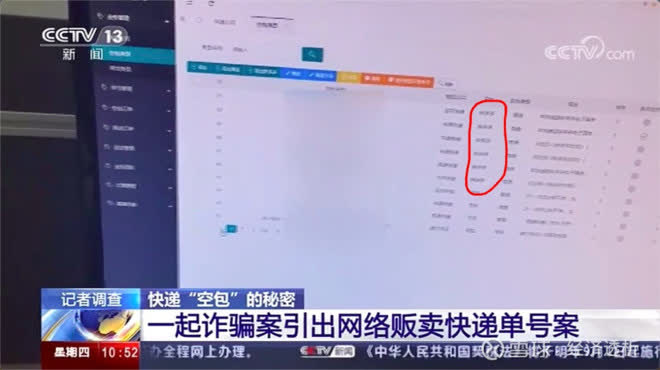 Pundits reckoned (contents in Chinese) that China’s second-largest platform by users was preferred because of its lax control and activity monitoring. In fact, it’s not a new phenomenon too. Pinduoduo was accused (contents in Chinese) of being a conduit for money laundering as early as May last year. The e-commerce player sued the media outlet alleging its involvement for slander and sought damages amounting to RMB10 million which it would donate towards efforts to fight illegal activities.

Pinduoduo is, of course, not so foolish to bring the state media to court this time. Furthermore, it announced the launch of a “Suspicious Information Real-time Inspection System” back in April. It is possible that the police were able to crack down on the criminal cases because of self-reporting by Pinduoduo.

The weakness in Pinduoduo has resulted in its rival JD.com regaining its lead in terms of market capitalization. Key arms of JD.com have been speculated to pursue their IPOs while its grocery delivery affiliate, Dada Nexus (DADA), has already completed its IPO in June. In an earlier article titled JD.com: Tremendous Value To Be Unlocked Soon, I discussed the history of JD Digits and the insights garnered towards understanding the prospects of its parent company. 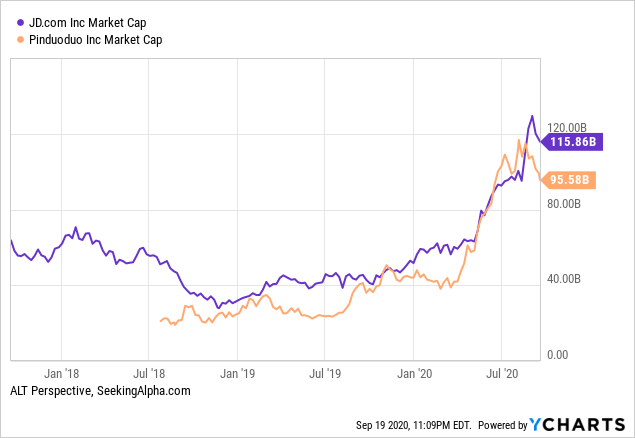 As explained in a past issue of the Chinese Internet Weekly, I found the KWEB ETF holding the most representative stocks in the sector. As such, an overview of the week’s share price movements of the top few holdings of KWEB as compared with the ETF itself is provided as follows for convenient reference especially for the stocks mentioned in this article.

Disclosure: I am/we are long BIDU, JD, IQ, TCOM, NTES, BABA, TCEHY. I wrote this article myself, and it expresses my own opinions. I am not receiving compensation for it (other than from Seeking Alpha). I have no business relationship with any company whose stock is mentioned in this article.

Editor’s Note: This article discusses one or more securities that do not trade on a major U.S. exchange. Please be aware of the risks associated with these stocks.