For the Bare Hill Rowing team, the trials of the past few months have meant adaptation and creativity, but never a total loss of their sport. Through efforts by the rowing community to provide equipment, establish safety protocols, and maintain a team environment, the athletes have been able to continue their training. Varsity girls Coach Holly Hatton says this work has set the team up well for both the possibility of virtual races this fall and long-term success in their sport.

Bare Hill Rowing team is a club team composed of athletes from Acton, Boxborough, and Harvard. This year’s team has 41 varsity rowers plus seven coxswains, 14 novice rowers, 11 eighth- graders, and seven kids in the learn-to-row program. 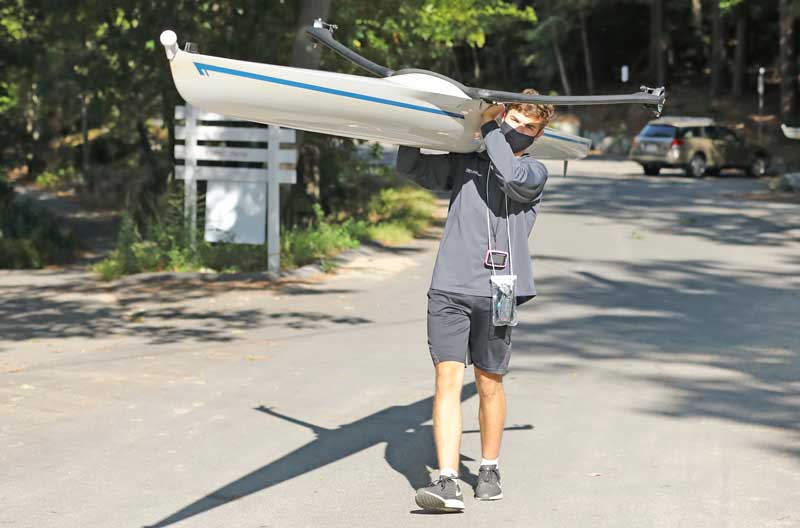 In March, when other sports had to cease practicing and competing, the rowers never stopped working out. Hatton said they were lucky to have enough equipment to provide each rower with a stationary rowing machine or bike to keep at their house and use in virtual workouts.

Coaches sent out daily training in the mornings, and athletes would complete it on their own and log their results on Google Classroom by 6 p.m. That way, they could hold one other accountable and continue to benefit from coaching advice and a sense of community when they couldn’t be together in person.

In May, Mitch McManus, head coach for Greater Lawrence Rowing, began hosting virtual erg races. Coaches from various teams in the area could enter their athletes and would then receive a lineup and race schedule to forward to their team.

A rower would enter the distance of the race into their erg monitor and start at a designated time. When finished, they would take a photo of the monitor screen and send that, along with a selfie, to their coach. Coaches would enter their athletes’ times in an online data sheet shared by participating teams and the results would later be announced on the Greater Lawrence Rowing Instagram.

For some races, Zoom invitations were sent to participants so they could see and hear each other while they raced. There was also a team boat option in which a crew of four athletes each “rowed” as far as it could in four minutes. Their distances were then combined, and the team who made it the farthest won.

In late June, rowing in single boats became an option again. Since it can be done with little to no contact between athletes, rowing was designated as a low-risk sport. Bare Hill Rowing took advantage of this and used the summer as a test run for a possible fall season.

For six weeks, Bare Hill Rowing Association offered programs for rowers of various abilities to get out on the water. To prepare, they devised safety guidelines based on state and local recommendations and on training considerations proposed by USRowing, which governs the sport of rowing in the U.S. These were submitted to the Board of Health and strictly adhered to during summer training.

Each day rowers were screened and checked in. Masks were worn at all times when not out on the water or docking. Athletes used hand sanitizer before and after practice and boats were sanitized after each use.

These are the same rules that are being used now, during the fall season, with the addition of an app used to monitor self-health checks. Athletes are required to conduct and log their screening by 2 p.m. each day to attend practice, and an alumnus has been hired to oversee the process and conduct contact tracing if necessary. According to Hatton, there have been no issues with policy adherence.

There will be no in-person competition this fall, but some regattas will be offered virtually. Fall regattas are long distance, typically about 3 miles, and boat start times are staggered even during normal seasons. Therefore, rowing lends itself a bit better to virtual competition than many other sports. Because Bare Hill Pond is less than 3 miles across, the team will need to travel to another location to compete. Rowers can then submit their times and use them to qualify for other virtual regattas such as Head of the Charles.

Hatton said the virtual regattas will be voluntary, but she expects that most of her varsity athletes will want to participate. “It never hurts to feel like you can put a competitive piece out there even if it’s not against other clubs.”

In late August, an algal bloom caused by myriad weather conditions, climate change effects, and past phosphorus pollution appeared on Bare Hill Pond where the team practices. While the bloom and subsequent no-contact advisory issued by the Board of Health means a suspension of most water activities, it hasn’t stopped the crew team from practicing: “Our membership was aware [of] the advisory and our athletes knew that … if they were concerned about any kind of skin rash … [we would] be happy to give them land workouts and that’s about it. We have continued to practice,” said Hatton.

While athletes are still putting in daily work and getting out on the water, there is much that is different in the sport this year. Typically, summer is a competitive season, culminating in a weeklong trip to the Canadian Henley Regatta. This year, it was a time to regroup, focus on training, and adapt to one of the biggest changes: training only in single boats rather than in the usual crews of four or eight rowers plus a coxswain.

The coxswain is a crew member who doesn’t row but sits in the back and acts a bit like an onboard coach, steering and directing the rowers. During practice, the coxswain would have a walkie-talkie through which the coach would give directions and feedback that would then be relayed to the rest of the boat.

In single boats with no coxswain, the rowers have to manage everything themselves. They have their own walkie-talkie, they time and keep track of their own workout, and are responsible for taking out, sanitizing, and putting away their own boats.

Before COVID-19, coaches would sometimes row alongside their athletes during workouts in their own boats to give them technical advice. Now, they plant themselves in one spot on the pond and give directions when the rowers come by.

Hatton said that her athletes have adapted well to these new responsibilities. “I’m pretty impressed with the kids and what they are able to accomplish right now, because we’re asking a lot of them and they all seem to be really stepping up and making it work, and it’s pretty cool.”

Since there is no role for coxswains on the water this year, Bare Hill Rowing is running a special program to keep them involved. One day per week, the coxswains work alongside the novice and eighth-grade coaches to gain more insight into coaching. Another day they run a land workout for the varsity team, and a third day they attend a webinar run by alumni who coxed in college.

Hatton said that rowing in single boats is more difficult, but that it may help her athletes better understand their skill sets. In a boat of eight people, one rower may not be especially strong, but is offset by the others. In a single, there’s no hiding where the strengths and weaknesses are coming from. “The discipline it requires to row in a single, it’s a lot. It’s much more complicated than rowing in an eight, but the value of it is that everybody—
every individual—now is learning how they directly can affect a boat,” explained Hatton.

“That’s what’s exciting for us as coaches right now is to see the level at which the athletes are doing this,” she said. “What we hope [is that] when we do get back to team boat rowing, we’ll be even that much better as rowers.”

Hatton said it has been a relief to get back on the water. It benefits the mental health of both athletes and coaches to be able to get outside and work out together while also maintaining physical distance, she said.

“Our most important goal is to keep [athletes] in touch with our sport, but also [to encourage them to] keep good practice outside of the sport and at home, because we want them to be able to stay in school, and we want everyone to be able to keep moving along in a safe environment.”

She hopes that the principles her athletes learn about protecting public health at practice will carry over into the rest of their lives and will make them conscientious members of the community.

Most of all, Hatton is grateful that their sport is one that has been able to be adapted to the circumstances, and that her team has the resources they do to accommodate new training formats. “We’re very lucky … We were able to shift and make it work and be able to be in a situation where we can meet the COVID protocols with ease, because we’re not a contact sport and because we had a decent number of single-person boats.”